Tax Talk is a series of articles brought to you by FSL’s own Tax specialist, Alex Ranahan.

One danger with a blog that runs monthly is that some juicy, relevant topics can come and go in the public’s attention before we’ve even planned the next post.  On the other hand, a view taken when the dust has settled on an issue can be more holistic.  Whilst we will not comment directly on the story which dominated the news a few weeks ago, we hope to provide a useful guide to the principles underpinning these two regimes.  In some cases we have simplified things quite a bit – as always do not take this blog as tax or financial advice.

It is fairly common sense that a country should only be able to take money off you in the form of tax if you live there, you do business such as buying or selling goods and services there or have some connection to it like work or owning property.  For example, I have never set foot in the United States and therefore would be rather miffed if a letter from the Internal Revenue Service came through my door suggesting I owed them some of my income.

The idea that the country in which you live is where you pay tax is known as tax residence.  Different countries have different ways of deciding if you are tax resident:  Spain looks at whether you have either spent more than half the calendar year (183 days) there or have most of your economic interests based there, while New Zealand checks for either that 183 days again or if you have a permanent place to live there.

Until 2013, the UK used a mixture of the number of days physically here (a matter of fact) and the individual’s intentions (a matter of opinion and deduction) to decide if an individual was resident, and had the phrase ‘ordinarily resident’ to describe a person’s residence over the long term.

Since 6 April 2013 we have had the statutory residence test (SRT).  The SRT provides a set of objective tests to determine, in order, whether someone is:

It gets even more complicated if you arrive in or leave the UK partway through the tax year and need to study the split year rules, or if you live abroad for a short time before returning to the UK and need to look at the temporary non-residence rules.  Though we won’t examine these here.

But how does this relate to one’s UK tax treatment?  Looking at Income Tax and Capital Gains Tax only, you are taxed in the UK like so:

(To be clear, the picture is more complicated than this.  We have not touched on disregarded income or other areas of UK tax for non-residents.  This blog is not a full review of the UK tax system for international individuals.)

As you can see, non-UK residents are treated essentially the same regardless of domicile, but a UK resident who is UK domiciled (in tax talk, that person is a UK ‘domiciliary’) is taxed very differently to a UK resident with a non-UK domicile.

A non-UK domiciliary who is UK resident is entitled – but not required – to claim the remittance basis of taxation, which allows them to pay UK tax on only their UK income and gains.  They are only taxed on overseas income and gains if sums derived from overseas are transferred into the UK, or say, assets acquired using overseas money are physically brought into the UK.  The act of bringing overseas amounts or assets into the UK is known as a remittance.

However, by claiming the remittance basis, the individual loses entitlement to certain reliefs such as the personal allowance for Income Tax and the annual exemption for CGT.  Given that the median household disposable income in 2021 was £31,400, most people will find that the personal allowance covers the bulk of their income and the remainder is only taxed at 20%.  Claiming the remittance basis and losing their personal allowance would only be worthwhile if they also happen to have substantial overseas income/gains which – crucially – never enters the UK.

Having said this, the remittance basis applies automatically without any loss of personal allowance or annual exemption if the non-UK domiciliary’s income and gains are less than £2,000 and are not remitted to the UK. 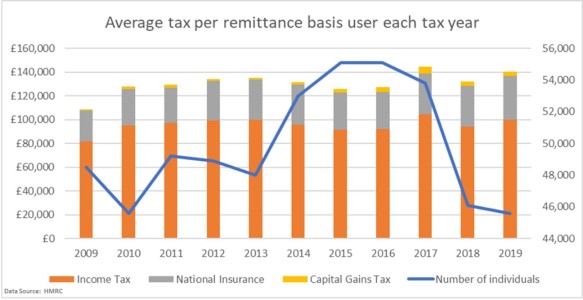 Researchers at the University of Warwick this year calculated that 0.3% of those earning less than £100,000 have claimed non-dom status.  This supports the point that it is mostly those non-doms whose UK income and gains are great enough that they can afford to lose their allowances who will claim the remittance basis.

So where does that leave us?  The press and the public have jumped on the story with the usual zeal, demanding a ‘fairer’ tax system.  The Labour Party has announced that it will scrap non-dom status and replace it with a temporary UK resident scheme.  But with the cost of living crisis, war in Ukraine and Downing Street parties pushing tax off the front pages, will the appetite for serious reform persist?

This blog can’t answer that.  But when it comes to UK investment we have seen the Government’s willingness to put investors first:  See the Chancellor’s refusal to countenance a windfall tax or the new asset holding companies regime.  Overseas investors who come to the UK may claim the remittance basis at first, saving lots of tax in some cases, but when it comes to remitting more funds into the UK for investment they are discouraged by the tax charge they’ll be hit by for doing so.  There are clearly conflicting policies here and it will take careful thought, and study of success stories in other countries, if the Government is to maintain the UK’s attractiveness to overseas investment without also attracting criticisms of an ‘unfair’ tax system.

If you’d like some further reading on this subject, an excellent, in-depth review of non-domicile status was published by FT Adviser here.

Please remember, this is not financial or tax advice.  Please consult a qualified adviser for further details.