A Day Out in Dublin

FSL were among the 750 or so attendees at last week’s European Financial Forum.  This was the fourth annual event held in Dublin by the Financial Times and IDA Ireland.  Speakers including Leo Varadker, Ireland’s Taoiseach; Steven Maijoor, Chair of ESMA; Philip Lane, Governor of the Central Bank of Ireland; and Sir Gerry Grimstone, Chairman of Barclays Bank.

As expected, Brexit was a hot topic touched on by most and highlighted the changing face of European markets going forward.  A move away from the hub and spoke model (London being the hub) to one with multiple centres across Europe trying to fill the London gap.  Whilst London continues to be a hub in its own right.  Philip Lane, Governor of the Central Bank of Ireland and member of the Governing Council for the European Central Bank, stated his view that Brexit will lead to an unwinding of the single market as we know it and the macroeconomic implications of a no deal Brexit impacting the world economy and potentially knocking 4 percentage points off the  Irish GDP.  While Ireland’s Taoiseach believed that a deal would be achieved in time. 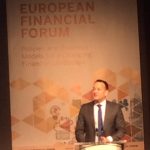 Though Ireland has benefited from Brexit, with many Financial Services firms setting up or expanded their European hubs in Dublin.  These include Bank of America, whose Vice Chairman announced that it had come at a cost of around $400m.  Barclays Bank have also restructured to develop a centralised European banking facility in Ireland.  Bankers working on the continent will now report into this new entity.  They have also expanded their trading presence in Frankfurt and all at a slightly lower cost of around £200m.

Other areas discussed were the making or breaking of companies through their use of technology; the growing importance of sustainable financing; and the changing sentiment of businesses.

John Berrigan, the Deputy Director-General, Financial Stability, Financial Services and Capital Markets Union at the European Commission, announced that they have prioritised sustainable finance and created an action plan with immediate focus on the environment but stretches into social and governmental issues.  The action plan includes 3 pieces of legislation on taxonomy, disclosures and benchmarks, and will put in place a framework to help the markets identify green investments.  Classification is seen as key as there are different shades of ‘Green’ and there needs to measurable consistency on their impact on the environment and their Return On Investment – as Green investment cannot be wholly altruistic.

A panel discussion on Fintech, AI & Blockchain Shaping the Future of Financial Services debated the advances in technology and the potential risks they pose.  Though some technology has been used in the sector for many many years the thing that’s changed and has moved the use of technology into new dimensions is the vast quantity of data now available.  The CEO of Citigroup added that technology is likely to be the cause of a bank’s survival or demise, if they don’t deliver against the demands of their clients.

All in all, an insightful day that lead to a number of news headline.  Below are a few of the news articles following the event:

Steven Maijoor On “Brexit – The Regulatory Challenges” At The European Financial Forum, Dublin

Citigroup boss expects Brexit talks to go down to the wire

State Street CEO on US Fed’s U-turn: ‘At best a hammer on the pause button’