When Nepal was hit by earthquakes in 2015, Stand by Me became aware of the Khairang, an isolated region in the mountains, home to a community of 4,600 people who were trapped in an endless cycle of poverty and discrimination. After the immediate emergency response, Stand by Me provided 55 earthquake resistant homes to the families who had lost everything, but they knew they had to do more to tackle the obstacles of caste, lack of educational opportunity and child trafficking that were destroying the hopes of children in the Khariang.

Stand by Me started to build a school where we could reach out to hundreds of children and in January 2017, the Bethany School opened. 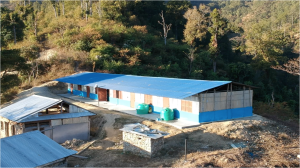 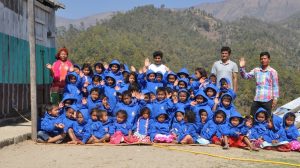 Today, the Bethany School stands in the heart of the Khairang and 72 children from the ‘chepang’ caste, who until recently were denied an education because of their caste and illiteracy, are now receiving an education that will give them the opportunity to become who they were born to be.

The children arrive at school early each morning to eat a nutritious snack. Filled with energy and enthusiasm to learn, the children enjoy maths, literacy and English lessons as well as weekly training on how to wash, look after their teeth and eat healthily. Through the provision of a good education, food, uniform, shoes, health care and the encouragement of our staff, the children are growing in confidence and walking a little taller as they realise their own self-worth.

The school provides more than an education as it is also a base from which we have begun to tackle other serious issues that the community face around adult literacy, child trafficking, early and forced marriage, the barriers imposed by caste and the lack of health awareness.

For parents who fear that their daughters could be snatched away at any moment, abducted by child traffickers or forced to marry against their will, the school is raising awareness and empowering girls, helping them realise their own worth and identity. Our loving staff equip them with the knowledge and skills needed to avoid these dangers and education also extends to the parents, encouraging them to not be passive in these situations but help protect their daughters from becoming trapped in the same cultural bonds of the generations before them.

To help families rise out of poverty and become free of the cycle of debt, Stand by Me have also initiated providing livestock to increase self-sufficiency. Five families have received a small herd of goats, a valuable source of income for the families and something the charity hopes to replicate. Through caring for and educating children at the school while supporting their families out of poverty, we are beginning to bring significant change in the lives of the people of the Khairang.